In Jerusalem are so many memories of ancient Israel. They have been saved and remained until our times despite the many kinds of military enemy boots that have stomped there. Memories and remains of the First and Second Temple Times, of David’s kingdom, of the ancient wall around the city, of olive oil production for pilgrims on their way to holy feasts and of ritual baths to be prepared for holy visit to the Temple. Of the more than 150 neighborhoods in Jerusalem, Pisgat Ze’ev is the largest neighborhood in Jerusalem. With more than 50,000 inhabitants, Pisgat Ze’ev is a relatively new and popular destination for families, young couples and older couples. 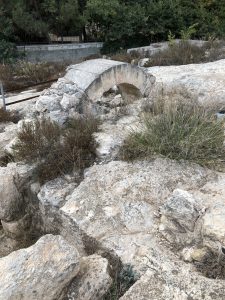 The neighborhood was founded in 1982 and is named after the Zionist activist Ze’ev Jabotinsky from the beginning of the 20th century. The population is a mix of religious and secular Jews, with a significant number of synagogues throughout the neighborhood. An increasing number of Arabs has also moved to Pisgat Ze’ev. Despite being part of the Jerusalem light rail, the district is located behind the 1967 Green Line and is internationally classified as a settlement.

The region where Pisgat Ze’ev is established in our days, has been once, in ancient times, an important source of oil and wine for use in the Temple in Jerusalem. There are remains of an oil press built into one man-made cave. Also there is something left of what once has been a building complex on the rocky surface above, including storage areas and a large wine press. The cave was originally a mikvah, a ritual bath, from the Herodian period. The cave was extended to 6.0 x 5.3 m during the Byzantine period.

Two carved stairs connected this cave with the structure above it. This oil press, like many others, had been built into a cave. The reason for the installation in a enclosure was to protect valuable equipment, even when it was not i 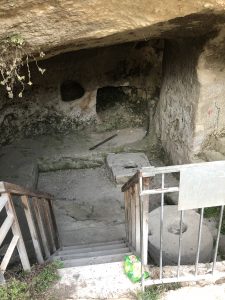 n use. This way the process could continue in all weather conditions, in case of rain or shine. Internal lighting could also be made to be able to work 24 hours a day work during the short press season. Moreover, the strength of the natural niche in the rock was able to resist the great forces produced by the leverage of the installation.

The various mikvaot are dated to the end of the Second Temple period. Furthermore, this farm complex has been inhabited by farmers. It looks like others farms of this type, such as in Qalandiya and in our days the Arabic neighborhood Shuafat. The place was likely abandoned with the fall of Jerusalem in 70 of the common era. Visitors to the Temple were able to find shelter in the complex of the farm. Olive oil was purchased for consumption and physical care. And the ritual bath was a necessary condition of cleansing of all the impurities mentioned in Torah. It was part of the process before the final goal came into view and the literal proximity to the G-d of Israel could be experienced.

This neighborhood is now home to many Jewish people families with children, and therefore has many kindergartens, primary schools and a few secondary schools. My grandchildren go to school and sometimes we pick them up, surrounded by enthusiastic chattering voices of classmates and schoolmates. This is part of the sparkling life in Jerusalem, where these children share in the fulfillment of prophetic words, “Thus says the Lord. Again there shall be heard in this place, which you say shall be desolate without man and without beast, even in the cities of Judah, and in the streets of Jerusalem, that are desolate, without man, and without inhabitant, and without beast, the voice of joy, and the voice of gladness, the voice of the bridegroom, and the voice of the bride, the voice of them who will say, Praise the Lord of the hosts: for the Lord is good. For His mercy endures forever. And the voice of them who will bring the sacrifice of praise into the house of the Lord. For I will cause to return the captivity of the land, as at the first, says the Lord” (Jeremiah 33.10-11).