Re’eh is the order Moshe gives to the Children of Israel. They need to realize that there is a choice to make in order to become happy. Life isn’t just an automatic thing. We need to work hard in order to reach the goals which are waiting for us. Moshe talks for a extended amount of time about the commandments he wants the Children of Israel to know and do. The next three parashot give them to us. These commandments are the majority of all the commandments Moshe has written in Devarim (Deuteronomy).

Moshe starts with the two main categories of the Law: blessing and curse. They give the perspective of how the commandments need to be understood. These categories help us to make that choice in our lives in order to become happy. 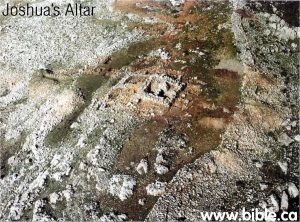 Because who wants to be cursed by his actions? And these categories help us to understand the New Testament when its authors talk about “the law”. Knowing that there are two categories we now know to ask the question: which law, the one of the curse or the one of the blessing.

In Devarim chapter 27 Moshe will explain more of the climbing of these mountains and which tribes will stand on which mountain. Only Joshua will execute this plan as we read in Joshua 30:30 and following verses. See the picture of his altar from afar and close by. The blessing Adonai has for Israel is of miraculous character, as we can see in Israel’s biblical history. The alternative, the curse, is repulsive. Not a difficult choice.

The condition to receive the blessing is: “that you hearken to the commandment of Adonai your G-d …” One set of these is the sanctification of the new Land. Places where gods were worshipped need to be destroyed. The altars which were used for this worship need to be broken. The pillars or obelisks need to be smashed. And the sacred trees need to be burned with fire. All the images and statues need to be cut down.

And Moshe makes clear that Israel will see the moment in time when only one place is fit for Temple worship: “only at the place that Adonai your G-d will choose from among all your tribes to place His Name there, shall you seek out His Presence and come there” (12:5). The prohibition to worship others gods is repeated often, because it has been and still very tempting to do so. Anything else than our G-d and anything else than His will is bound to make us unhappy.

Another but similar set of commandments deal with the prohibition to do as the Cana’anites do. It is very tempting to live as the world and to act like people who don’t believe in His principle of blessing and curse as described in Torah. What is so tempting about it: quick result, instant gratification, be like the others and belong to the group instead of being different and holy. Also it sometimes looks like the group of people occupied with G-d is very busy telling others what to do and what not to do, and judging others to feel better about themselves. That might make it even more tempting to go to the other side where liberty reigns. Wrong reason of course.

Moshe also warns against a false prophet producing signs and wonders. The sign of the falsehood will be twofold: 1. the sign or wonder happens; 2. the prophet invites his followers to follow other gods to worship them. My thoughts go out to Yeshua. He performed miracles, signs and wonders. They came about. But He never encouraged people to worship any other G-d than the G-d of Israel. People who worshipped Him Yeshua said to look at Adonai and to worship Him. People who backslid in being Torah observant He admonished and encouraged to keep Torah, even the smallest of the commandments, read Matthew 5:19. Knowing all this what is the message? To avoid anything which might lead us to our curse, to develop and extend our love relationship with Adonai and to embrace Torah and to be very careful to choose to become happy.