On October 1 of 1946, after 216 court sessions, the International Militairy Tribunal in Neurenberg delivered its verdicts sentencing the ten leaders of the Nazi party to death by hanging. The execution was going to take place on October 16 of the same year 1946. Julius Streicher made his melodramatic appearance at 2:12 a.m.

While his manacles were being removed and his bare hands bound, this ugly, dwarfish little man, wearing a threadbare suit and a well-worn bluish shirt buttoned to the neck but without a tie (he was notorious during his days of power for his flashy dress), glanced at the three wooden scaffolds rising menacingly in front of him. Then he glanced around the room, his eyes resting momentarily upon the small group of witnesses. By this time, his hands were tied securely behind his back.

Two guards, one on each arm, directed him to Number One gallows on the left of the entrance. He walked steadily the six feet to the first wooden step but his face was twitching. As the guards stopped him at the bottom of the steps for identification formality he uttered his piercing scream: ‘Heil Hitler!’ As its echo died away an American colonel standing by the steps said sharply, ‘Ask the man his name.’ In response to the interpreter’s query Streicher shouted, ‘You know my name well.’

The interpreter repeated his request and the condemned man yelled, ‘Julius Streicher.’ As he reached the platform Streicher cried out, ‘Now it goes to G-d.’ He was pushed the last two steps to the mortal spot beneath the hangman’s rope. The rope was being held back against a wooden rail by the hangman. Streicher was swung suddenly to face the witnesses and glared at them. Suddenly he screamed, ‘Purim Fest 1946.’ [Purim is a Jewish holiday celebrated in the spring, commemorating the execution of Haman, ancient persecutor of the Jews, together with his ten sons, as described in the Torah.

Streicher had been a Nazi since early in the movement’s history. He was the editor and publisher of the anti-Semitic newspaper “Das Strummer.” In May of 1924 Streicher wrote and published an article on Purim titled “Das Purimfest” (The Festival of Purim). In order to publish his vitriolic attack Streicher must have had a good deal of knowledge about Jewish thought and practice. However we can only speculate to what extent he was aware of the remarkable parallels between Haman and his own execution. However, they are striking.

“The king said to Esther the queen, ‘The Jews have slain and destroyed five hundred men in Shushan the capital, and the ten sons of Haman…Now whatever your petition, it shall be granted; whatever your request further, it shall be done.’ Then Esther said, ‘If it please the king, let it be granted to the Jews that are in Shushan to do tomorrow also as this day, and let Haman’s ten sons be hanged upon the gallows.’ ” (Esther 9:12-14) 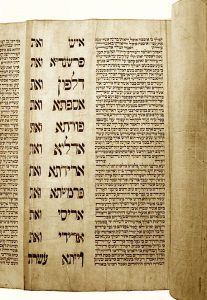 Those three letters together form taf-shin-zain, the last three numbers of the Jewish year 5707, which corresponds to the secular year 1946, the year that those ten Nazi criminals were executed.

The Nuremberg trials were a military tribunal and thus the method of execution was usually by firing squad. The court, however, prescribed hanging. Esther’s request “Let Haman’s ten sons be hanged” echoes down the ages. Equally uncanny is that the date of the execution (October 16, 1946) fell on “Hoshana Rabba” (21 Tishrei), the day on which G-d seals the verdicts of Rosh Hashana for the coming year.